Sip of China’s grassroots democracy at a teahouse 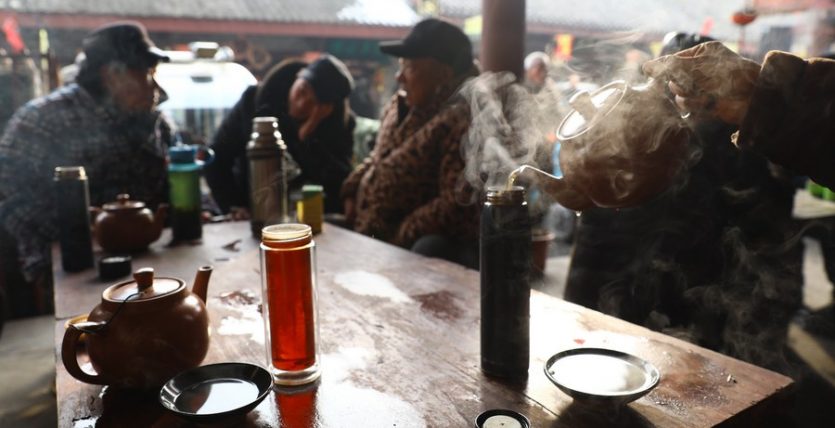 Sip of China’s grassroots democracy at a teahouse

HEFEI, Dec. 9 (Xinhua) — The charcoal fire in the stove was red, the pot water had reached a rolling boil and curls of smoke were emanating from porcelain tea bowls, as a dozen villagers sat in a circle to discuss a reconstruction design of an ancient city gate in east China’s Anhui Province.

“Your suggestions on the gate’s reconstruction have been adopted, with some new progress,” said He Weijun, chairman of the people’s congress of Linhuan Township in Suixi County, to the villagers. “I’ll note down your views regarding the design sketch and pass them on to the government later.”

Over the course of past years, it has become a convention for He and other deputies of Linhuan Township People’s Congress to meet the grassroots residents at the teahouse on the 10th day of every month, and listen to their ideas about public affairs of the town.

“People are more willing to express their opinions at the teahouse in a relaxed atmosphere, so we decided to utilize this platform to connect with grassroots voices directly,” said He.

Linhuan Township, with hundreds of years of tea culture history, has more than 20 teahouses, attracting some 6,000 tea lovers every day.

Zhang Yunxiao, 71, one of the frequent visitors of teahouses, is a regular attendee of the monthly meeting.

“We can speak freely and the deputies would give us feedback at the next meeting,” said Zhang, adding that it makes him feel that his voice has been heard and valued.

The system of people’s congresses, an organizational form of political power compatible with the governing system of the people’s democratic dictatorship, is China’s fundamental political system, and the ultimate approach and optimal solution to guaranteeing the people’s status as masters of the country. It is also an important institutional support to whole-process people’s democracy, stated a white paper released on Dec. 4.

“Meeting people at the teahouse effectively complements our daily work mechanism, as it allows people to participate in public affairs before, during, and after the decision-making process. Many ideas and suggestions from the grassroots are reflected in the decisions of the government,” said He.

He noted that during the past five years, over 300 pieces of opinions and suggestions from the grassroots have been accepted, with the issues ranging from environmental protection, rural infrastructure construction to the preservation of cultural relics.

“With people increasingly concerned about public affairs, democracy is embodied in not just elections but every aspect of China’s grassroots governance,” said Dong Yang, mayor of Linhuan Township, adding that the meeting at the teahouse is a practice of the whole-process people’s democracy at the grassroots level.

A member of the Suixi County Committee of the Chinese People’s Political Consultative Conference, an advisory body to the government, Wang Shihong, 60 — who spends half of the week at the teahouse — echoed Dong’s views.

“I have been mediating conflicts among people at the teahouse for over 30 years. Gradually, they have shown willingness to offer suggestions and express their demands as they trust me, thus I can pool wisdom and inform about it to the local government,” said Wang, adding that many opinions heard at the teahouse, such as installing traffic lights, have been put into practice.

Over the years, members of the town’s mediation team have increased to 55 from just a single person, as many more people have volunteered to join in, forming an important force in grassroots self-governance.

“Many disputes can be solved through communication, sitting at the teahouses,” said Zhang Xiuxia, owner of a teahouse and also a mediator who has settled over 100 disputes during the past six years.

Besides the teahouse meetings, people across China have explored many different pragmatic practices of democracy based on the local characteristics.

As Chinese Vice Foreign Minister Le Yucheng recently noted during a dialogue on democracy — the practice of democracy is rooted in its own soil.

The past and the present have proven that China’s approach to democracy is based on national conditions and is supported by the people, Le said, adding that such an approach is real, effective and successful.