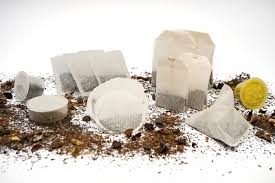 “The levels of nylon and polyethylene terephthalate (PET) particles released from the teabag are several orders of magnitude higher than plastic loads previously reported in other foods,” according to the McGill University study. Researchers tested leachate from teabags used by four popular supermarket teas. The peer-reviewed study, published in the journal concluded that “at brewing temperature (95 °C) a single tea bag releases approximately 11.6 billion microplastics and 3.1 billion nano-particles into a single cup of the beverage.” The tea bags were sliced open to remove the tea but a control demonstrated no difference in the amount of leachate compared to uncut bags.

Suppliers explain that compostable bioplastics, while more expensive, are viable alternatives to traditional plastics. Biodegradable plastics decompose by the action of living organisms, usually microbes. These microorganisms give off carbon dioxide, water and biomass under industrial composting conditions that require temperatures of at least 60oC. To meet European Union standards tea bags made with bioplastics must break down in less than 12 weeks.

In contrast, long-polymer plastics including polyethylene, polypropylene, polystyrene, poly(vinyl chloride) and poly(ethylene terephthalate) degrade into smaller and smaller fragments (nanoplastic) that are not biodegradable. Some plastics made from petroleum, such as PBS (polybutylene succinate) are biodegrade and some plastics that originate from renewable biomass such as polyethylene and Nylon 11 are non-biodegradable.

There is no lower limit to the size of nanoplastic particles but these are generally measured in micrometers. There are no known ill-effects from ingesting what amounts to 60 micrograms – 60 millionths of a gram of plastic released by teabags, but consumers expressed concern, contacting their favorite brands for assurance. PET and nylon are certified as food-grade, a standard that limits degeneration to 10 milligrams per square meter of surface area in contact with foods. It is not known how much nanoplastic is in the environment.

Since the brands were not named the immediate response by suppliers was “our tea is not packaged in nylon or PET.”

Comments by Eliot Jordan, vice president of tea at Mighty Leaf are typical: “We’ve received a number of questions about the safety of our tea pouches in response to recent articles on the CBC News and CNN websites.  We want to assure you that at Mighty Leaf Tea, the quality and safety of our tea is our greatest concern.  The study cited in the article did not test Mighty Leaf Tea pouches or the materials they are made of.  Mighty Leaf Tea pouches are made from a 100% polylactic acid (PLA) woven yarn.  The PLA is made from the fermentation of sugar milled from corn. In addition, our tea pouches are made with good manufacturing practices and comply with all applicable food safety regulations.”

Tea bags made of nylon and PET when viewed under an electron microscope revealed high levels of microplastic, and even smaller nano-plastic particles. (Diagram by LM Hernandez et all, McGill University)

Aneta Aslakhanova, global marketing director, at Newby Teas (UK) Ltd., wrote, “For us the focus in the last five years has evolved from ‘best packaging’ to ‘less and safe packaging’.”

“We have always used biodegradable materials in the bags themselves. All Newby teabags and pyramid bags are plastic-free. Fully biodegradable, our Silken Pyramids are made from corn starch while our Classic Teabags are made from a mixture of wood pulp and abaca which is a natural plant fiber,” she wrote.

Sharyn Johnston, founder of the Australian Tea Masters, uses an advanced Japanese material instead of plastic and Nylon bags “so our health concerns regarding contamination could well and truly be behind us.”

Woven tea bags made of synthetic polyester and nylon materials used in making the mesh pyramids “represent approximately 5% of the total teabag materials market,” according to Helsinki-based Ahlstrom-Munksjö, a leading manufacture of teabag materials. The company does not use PET or nylon, relying instead on a bio-plastic made from PLA (polylactic acid) derived from corn starch or sugarcane. The company also produces a fully compostable and biodegradable tea and coffee filter with PLA as the heat-seal fiber.

Stuart Nixon, vice president, beverage & casing business at Ahlstrom-Munksjö wrote, “Although traditional heat-sealable, ‘string & tag’ and BioWeb materials were not part of this micro-plastic study, Ahlstrom-Munksjö will in the coming weeks investigate if there is any release of microplastic particles from traditional heat-sealable, string and tag type and BioWeb filter materials that it produces.”

Terranova, a large filter manufacturer in Barcelona, said concerns about non-compostable plastics led the firm to develop cellulose and abaca filters. Heat seal versions contain PLA from vegetal origin. “We do not use any PET or Nylon in any of our filter paper products,” wrote Pere Paris, regulatory affairs and food contact manager.

Dr. Jerry Burch, product compliance manager at Glatfelter Composite Fibers Business Unit, wrote, “The presences and ingestion of microplastics in the human body and any potential health implications are a relatively new subject.”

“Recent studies have identified that microplastics can enter the body. Key health organizations have acknowledged that human ingestion of microplastics is an area where much more research is needed to provide a full risk assessment,” writes Burch. As a responsible supplier, Glatfelter will continue to research and evaluate the issue, he said, adding, “There is no indication of any health concerns related to the use of Glatfelter’s teabag paper.”

Around 90% of modern tea consumption consists of low-quality cheap teabags, observes Aslakhanova. “As a premium tea supplier, it is obvious that the consumer behavior needs to change,” she wrote.

“In the short-term, we motivate consumers to switch to quality loose leaf tea which is the most sustainable option. Sounds like a lot of work for many, but in reality, it takes perhaps a minute or two more than a teabag and helps to save the planet.”